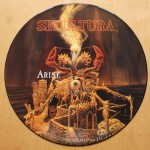 An absolute thrash classic from one of Brazil’s biggest (and best) exports. Faster than fast with the licks and melodies needed to back it up and released back in 1991 to massive praise this was a genre defining record that propelled the young lads to international recognition. This picture disc release features the awesome Michael Whelan cover artwork.

A1: Arise
A2: Dead Embryonic Cells
A3: Desperate Cry
A4: Murder
A5: Subtraction
B1: Altered State
B2: Under Siege (Regnum Irae)
B3: Meaningless Movements
B4: Infected Voice
B5: Orgasmatron