Death – The Sound of Perseverance 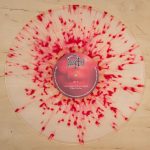 The final LP from Chuck Schuldiner’s immensely influential death metal band released in 1998, three years before his death at the painfully young age of 34. This saw a continuation of the move towards far more technical playing styles and composition, well away from the band’s earlier albums which were a more traditional death metal style. This clear and red splatter vinyl version was a reissue released on Back On Black in 2008.

A1: Scavenger Of Human Sorrow
A2: Bite The Pain
B1: Spirit Crusher
B2: Story To Tell
C1: Flesh And The Power It Holds
C2: Voice Of The Soul
C3: To Forgive Is To Suffer
D1: A Moment Of Clarity
D2: Painkiller