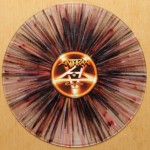 Anthrax’s tenth studio album released in 2011 LP on Nuclear Blast and the first one in eleven years to feature Joey Belladonna on vocals. Their old material is great but nothing since the early 90s had really hit the mark for me, this was a bit of a return to form. Released on many different vinyl versions including a pretty sweet double picture disc this is the awesome splatter vinyl release that was limited to 250 copies.