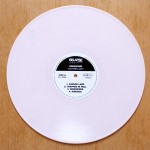 Headed by matt Harvey of Exhumed and featuring members of Possessed, Malevolent Creation and some other bands who I’ve never heard of Gruesome is a tribute to the early days of Death. It’s absolutely wicked stuff and the recreation of that Leprosy era sound is spot on. Released via Relapse Records this bone white (although the pics make it look pink) edition was limited to 100 copies and was gone in a flash!

A1: Savage Land
A2: Trapped In Hell
A3: Demonized
A4: Hideous
B1: Gangrene
B2: Closed Casket
B3: Psychic Twin
B4: Gruesome