Immortal – Battles In The North 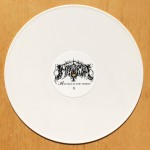 Repress of Immortal’s 1994 LP, Battles In The North. Remembered as much for its ludicrous cover art and comedy accompanying videos as its music this album met mixed reviews from fans as some decent songs were let down by a poor mix and some questionable drumming. Released via Osmose Productions on white vinyl, limited to 500 copies.

A1: Battles In The North
A2: Grim And Frostbitten Kingdoms
A3: Descent Into Eminent Silence
A4: Throned By Blackstorms
A5: Moonrise Fields Of Sorrow
B1: Cursed Realms Of The Winterdemons
B2: At The Stormy Gates Of Mist
B3: Through The Halls Of Eternity
B4: Circling Above In Time Before Time
B5: Blashyrkh (Mighty Ravendark)