Grotesque – In The Embrace Of Evil 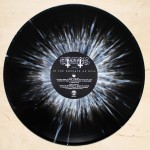 Before At The Gates came Grotesque. In The Embrace Of Evil was the final release and formed a compilation of the previous demos and releases. This version was re-released by Hammerheart in 2015 with on amazing black & white splatter vinyl, limited to 100. There was also a picture disc version released at the same time.

A1: Thirteen Bells Of Doom
A2: Blood Runs From The Altar
A3: Submit To Death
A4: Fall Into Decay
A5: Seven Gates
A6: Angels Blood
B1: Nocturnal Blasphemies
B2: Spawn Of Azathoth
B3: Incantation
B4: Church Of The Pentagram
B5: Ripped From The Cross